AUGUSTA NATIONAL GOLF CLUB, AUGUSTA GEORGIA | Moments in life often turn into memories. And we hope that moments in our imagination one day become reality. When those two intersect, and we live out the moments we had only imagined before, it becomes a highlight in the movie of our lives – one of the many short films we will play over and over in our minds for as long as we live.

This week, a moment I had long anticipated is now a memory. My first trip to The Masters.

I have many Masters memories. As a lover of the game of golf, it’s a week in April I’d look forward to every year. In the almost fifteen years I’ve been in golf, all of the special times I associate with the Masters have been from afar, always watching through a screen, envious of the players, patrons and broadcasters who walked the greenest grass in the game.

In the spirit of a “Tradition Unlike Any Other,” I created a few of my own. In middle school, I’d sit in class with my phone perched on my backpack with hopes that my teacher wouldn’t see the pink azaleas reflecting in my eyes. I never wanted to miss a minute of Masters’ coverage. For the duration of the week, green was a constant in my outfits on and off the golf course. And Masters Sunday was an uninterrupted day on the couch alongside my dad, brother and grandpa. Watching the 2012 Masters is one of my last vivid memories I have with my grandpa weeks before his passing - my most important Masters’ moment until the other day. I can only say that because I know my Grandpa wishes he would have been lucky enough to take a trip to Augusta in his 73 years of life. As far as I’m concerned, he could have been there with me on Tuesday because it’s the closest thing I’ve seen to heaven.

After all of my prayers, God had answered with a trip to Amen corner. Just a few weeks ago the head coach at UNC, Aimee Neff, my former assistant and a good friend, called to ask me what I was doing on April 5th. Unsure of why she was asking, I told her it was an off-week, and I had no plans. She quickly hit me with, “Do you want to go to Augusta?” It was a “yes” that came off almost as natural, excited and doubtless as the one I’d said to my fiancé when he asked me to marry him a few months back.

Once I parked, got through security and scanned my ticket - I got my first peak of Augusta grass. Yes, in this case, the grass is greener on the other side. I would finally witness this green jacket championship with my own two eyes.

All my questions about the mystical place would be answered. I’d walk the hills that everyone says are understated on any camera. I’d munch on a pimento cheese sandwich, wash it down with southern sweet tea, and finish on a peachy note with an ice cream sandwich. A few simple things I’ve always longed for. However, after a few minutes through the gates, I realized the experience wasn’t going to be about those material matters. It was about something that would last longer than wrappers, hats, pictures and the bags of Augusta keepsakes every patron walked back to their cars with. Instead it was about moments. Master’s moments. 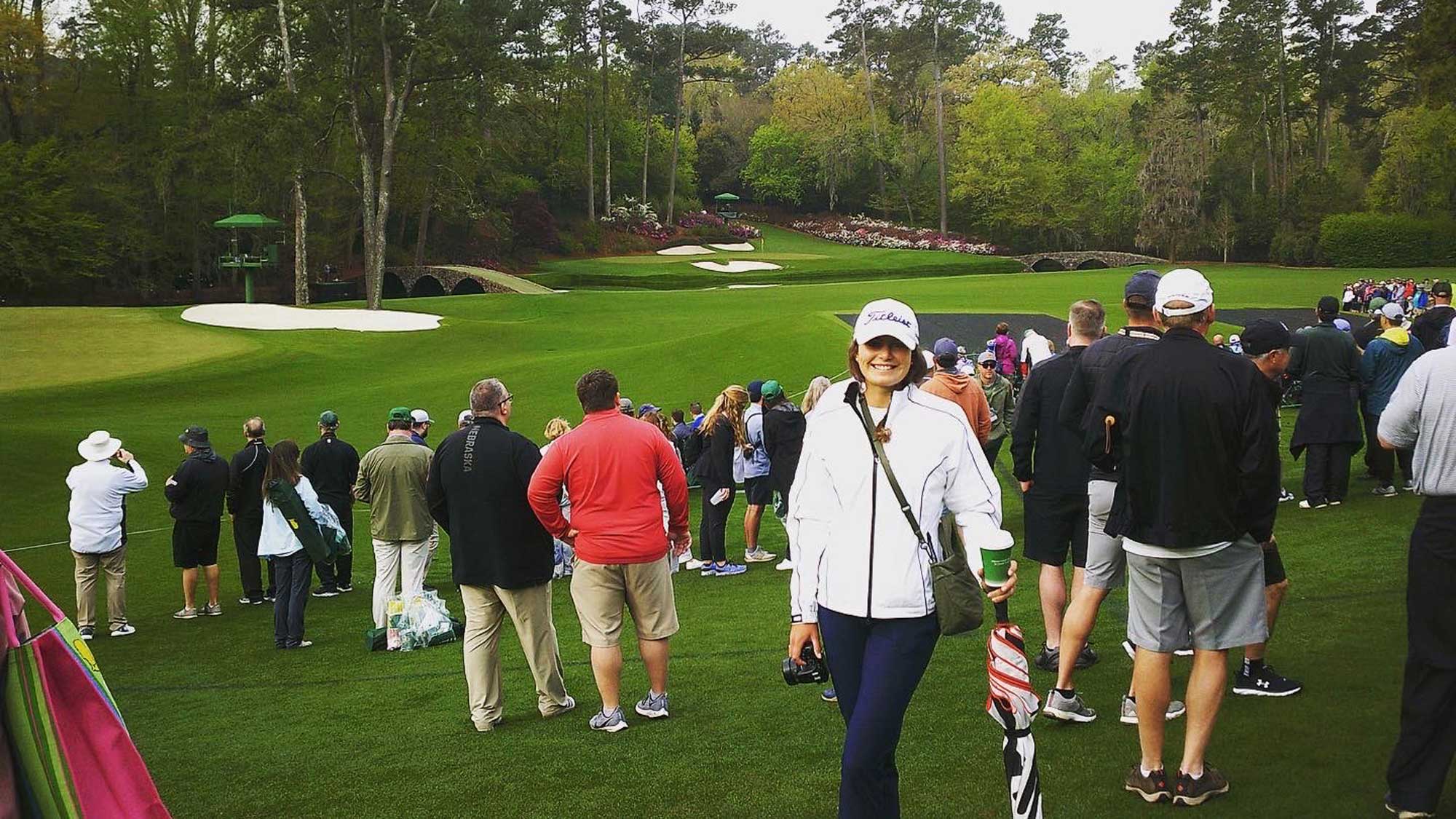 On Tuesday, the weather forecast was something storm chasers dream of, but to Masters attendees was a nightmare. With a 100 percent chance of rain, thunderstorms surrounding the area, a tornado warning and possibilities of hail, I knew my first trip to Augusta would be cut short.

When I arrived onsite, Aimee and I started our speed walking to see as much of the plush land as possible. We made our way through the herd of patrons crowding the golf shop and snack bar. We arrived on the first tee with eyes wide open and in the same awe I imagine Christopher Columbus had when landing in America. In perfect timing, we got to see current Tar Heel, Austin Greaser, tee it up in his practice round with Coach Dibitetto hauling his bag. As I watched the two of them walk down the first fairway accompanied by three other PGA Tour players, I could only think of the moment they were sharing. Coach Dibitetto had been downgraded from head coach to a caddie in the elusive white jumpsuit, a demotion all head coaches dream of.

From there, I saw the eighteenth hole. Most tunnels are dark with a light at the end. The narrow shoot that is the final determinant of the Master’s champion was the first tunnel I’ve seen shimmering with light. With childlike imagination I swung my umbrella and hit the perfect butter cut. I prayed on Amen corner - prayers of thanks. On 16, I watched players stuff it next to the pin and skip it across the pond. In crunch time, we’d walk the last few holes and head to the shop to grab some goodies. Without phones, I made my best judgement on a Masters gift for each member of my family. After a few minutes of stressful shopping, I walked out of the golf shop to see patrons marching in the wrong direction. The rain had yet to hit, but bodies flooded toward the exit. Over the loudspeaker, in the most pleasant tone a voice spoke words all patrons had been dreading. Play was suspended.

I instantly made a mad dash to the nearest snack station. Out of breath but full of hope, I asked the workers if I could go in to get some food. They quickly informed me that this was closed along with all other stops on site. Pimento cheese and peach ice cream wouldn’t be popping into my mouth. I was as devastated as a child on Christmas morning that didn't receive the one gift they’d wished for all year. I wasn’t the only one sitting in this type of devastation. To my right, were two men sifting through the trash can in search of the elusive sweet teacup. They weren’t homeless, but they were not going home without one. We stood outside the snack station conversing over the defeat of an unclaimed pimento cheese sandwich. One of the guys was a teacher from Texas that won the lottery in 2019. For him, it was a three year build up to this moment. We swallowed the fact that our taste buds wouldn’t be getting a touch of Masters tradition. However, that moment might have been sweeter than the blend of Georgia’s sacred fruit, sugar and cream. It was a Masters moment.

Eventually, I’d join the herd and make my way to the exit. On the way out, I’d get one more view of the pristine practice facility. With each step, I envisioned another shot I’d hit onto one of the practice greens. I got a glimpse into the broadcast set up that was perched on the back of the range. Just before leaving the premises I watched a little girl getting interviewed from a local TV station on her first time Masters experience. With a deep southern drawl she said, “We have a golf course back home, but it is nothing like this.” It was so simple, but so well said. Nothing was

like this. I couldn’t help but think how that was her Masters moment. She was so young, but it’s an experience she will carry for the rest of her life.

If she is a student of the game, she may find herself back at the sacred grounds as a competitor. In my youth, I never dreamt of competing at the prestigious sight, but now young boys and girls can plant those seeds in their brains. Maybe one day those dreams will blossom alongside the azaleas at Augusta National. If you watched this year’s Drive, Chip and Putt you witnessed many Masters moments. My favorite has to be when Autumn Solesbee saw her “dream come true.”

After the completion of this year’s August National Women’s Amateur, amateur star Rach Heck told little girls to keep dreaming. A gesture that playing on the golf's holy ground as a competitor was everything she had ever imagined.

Come Sunday afternoon, there will be big moments. The Masters moment every player in the field hopes they get to live out. An interview in Butler Cabin, with the most comfortable green jacket hugging their back.

It is in fact, “A Tradition Unlike Any Other.” Yes, for all the things that make the place special, but for something else - for the fact that avid golfers, bandwagon fans, patrons and players can all share in the big and little moments that are offered from this historic tournament. Thank you, Augusta National, for creating this common ground in which all humankind can marvel at and draw some sort of significance.

I’m grateful for all the moments and now memories I’ll carry with me from The Masters.