POPOV STEAMROLLS TO 36-HOLE LEAD
With a bogey-free, 9-under par 63 in the second round of the inaugural Founders Tribute at Longbow Golf Club, Sophia Popov (Heidelberg, Germany) jumped into the driver’s seat after 36 holes and heads to the final round with a one-stroke lead.

The performance so far comes off back-to-back weeks in Toledo, Ohio. She caddied for Anne Van Dam at the LPGA Drive On Championship then finished tied for ninth at the Marathon LPGA Classic presented by Dana. That top-10 result secured a spot in next week's AIG Women's Open at Royal Troon in Scotland.

"It has been a really fun couple of weeks for me. Caddying for her [Anne] was cool since I've known her for a long time and she's been my best friend for a while," said Popov. "To see a different kind of game—obviously she hits it a mile—so it was interesting to see her thought process and what mine was watching her, then merging them to make good decisions.

“I used that for Marathon and although I don't hit it quite as far, I strategized better and used a caddy perspective instead of thinking only like a player. Now playing in the British Open, the fun continues and I'm super excited. I haven't played in the event since 2011 and I love links golf."

Popov is a three-time winner in 2020 on the Cactus Tour, a mini tour that hosts golf tournaments in California, Nevada and primarily Arizona. Those experiences provided Popov that mental edge needed to take her game to the next level and hopefully capture a coveted first win on the Epson Tour.

"Every tournament is different, and you have to keep your head in it, whether it is Cactus Tour, Epson or LPGA,” Popov said. “The situation is unique every time, but I definitely learned from those wins. It is pedal to the metal for me and keep going even lower.

“This type of course is literally what I played [on the Cactus Tour] for three months earlier this year. I know how the ball reacts in the desert air, but it is tough coming from the Midwest to out here. It's different, but at the same time it is home so a home-field advantage, maybe.” 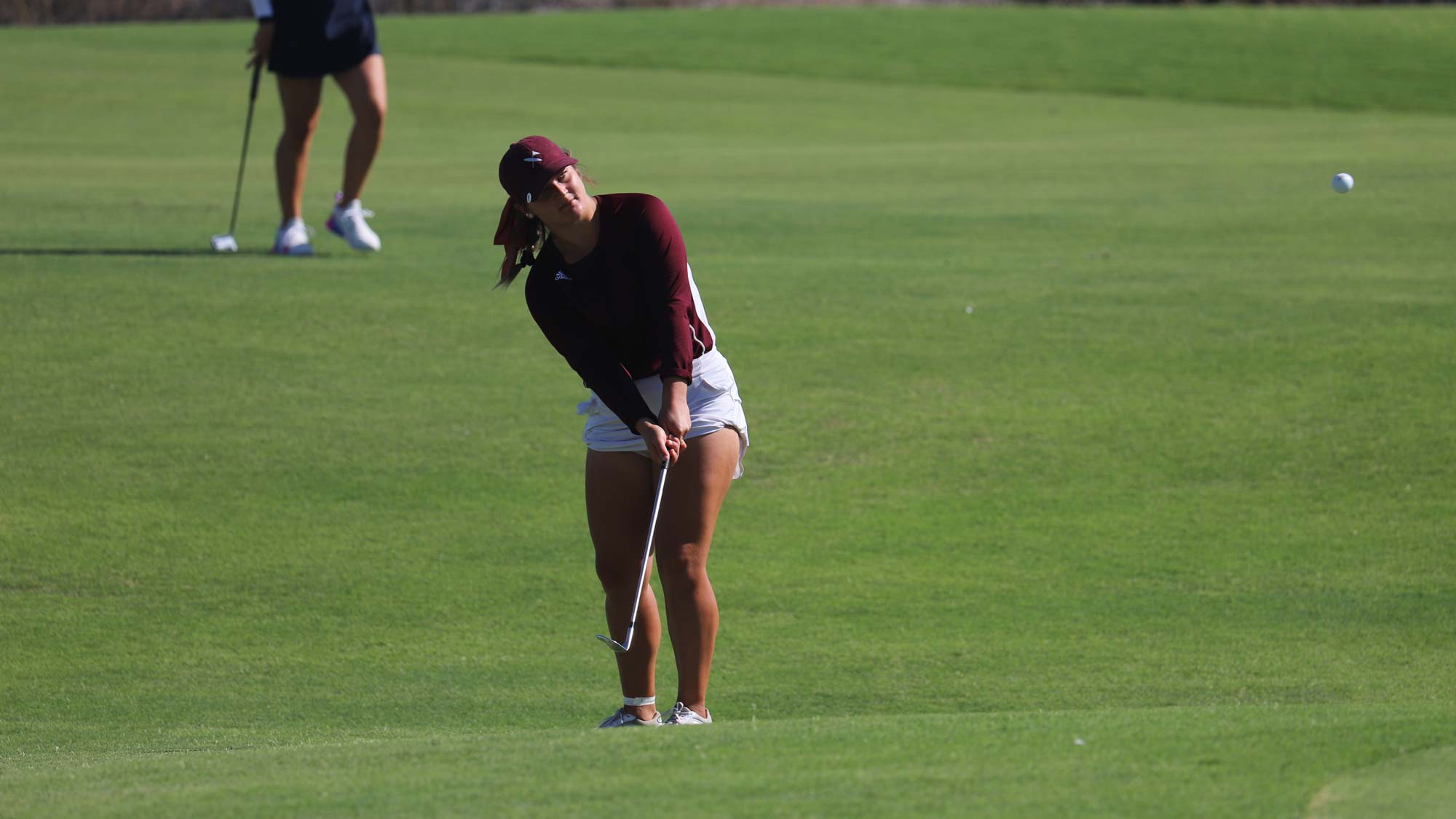 WHITE SHOWCASING GRIT, TOUGHNESS IN EPSON TOUR DEBUT
For her first Epson Tour event, Sarah White (Grand Rapids, Michigan) is sure making the most of the opportunity. The Texas State University graduate finished fifth in the Texarkana Children Charities Open on the Women’s All Pro Tour (WAPT) last month to qualify as an exemption for the inaugural Founders Tribute.

After 36 holes at Longbow Golf Club, White is 11-under par overall. She used an impressive 10 birdies this afternoon to sign for a 7-under par 65 and is just one shot back of the lead in solo second.

“The WAPT does a great job and the girls out there are really good,” said White. “I still feel super humbled to be able to play at this level because I just recently turned pro, didn’t go to a huge school and don’t have a background like some players have. I believe in myself and trust in my own abilities that I can do it. I have played really well and know that I can compete with anyone.”

A native of Grand Rapids, Mich., White played competitive ice hockey for 13 years growing up and was the starting goaltender for two seasons on the East Kentwood High School varsity hockey team. Even though she turned in the stick for a driver, she is showcasing the tenacity that undoubtedly developed during her time on the rink.

“I have that competitive spirit in me from playing ice hockey for so many years,” White said. “I know what it takes, the grind and all of that. I hit a 354-yard drive today and this course sets up for me really well. I’m also putting well, which trusting that frees me up.” 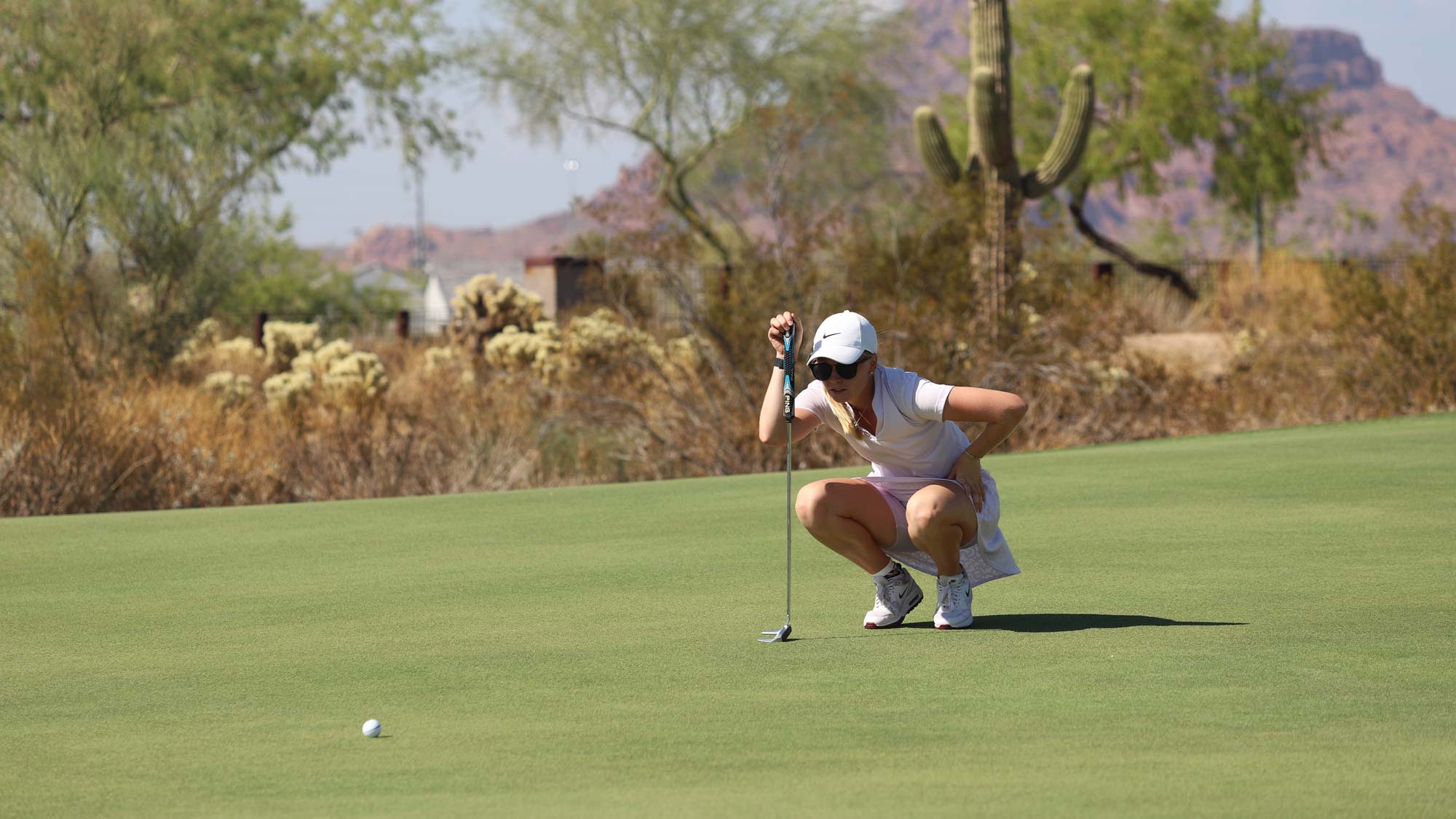 VETERAN KAUFMAN AND ROOKIE KINHULT TIED AT 9-UNDER OVERALL
Texas Tech alumna Kim Kaufman (Clark, South Dakota) and Florida State University alumna Frida Kinhult (Fiskebackskil, Sweden) both fired a 4-under par 68 on Saturday to sit tied for third together on the leaderboard with 18 holes remaining.

Kaufman faced several ups and downs in the second round, but consistently found birdies all day to keep her score low. The seven-year LPGA Tour veteran recognized that today may have been tough, but the decisions only strengthened her for a hopeful Sunday charge.

"We were on a roller coaster. I started with three three-putts in seven holes, but we kept at it,” Kaufman said. “You can get into birdie stretches here so thankfully I did. We played in a twosome which was hard, kind of struggled to find a rhythm. It was hot and just got through the day.

“I've been really diligent about taking Mondays off [during this four-week stretch] and doing nine-hole practice rounds, with a lot of rest and lot of hydration. No lead is safe and have to be patient. It is easier to press when you feel that you need to make all these birdies. I'll go out and keep doing what I have been, hopefully make a few more two-putts."

With all players battling the heat in Maricopa County, mental fortitude is a must to make the weekend. Kinhult may find herself near the top of the leaderboard, but she understands where she must improve and continuing to hydrate will keep her brain strong for the final push.

"It was a battle out there today in the heat,” said Kinhult. “I made probably two or three bad decisions, which sometimes if your brain is tired you make stupid decisions. Tried to stay hydrated, put some ice down the shirt and around the neck because you have to deal with it and do what you can do.

“I'm trying not to focus on the heat as a challenge, but do what I can do in it. I'm just excited to be out here again and be able to compete. With my Whoop band, I'm usually between 95-105 in the heart rate average and today was 131. Combine the heat and nerves and excitement, I'll just have to focus."

NOTABLE QUOTES
Haylee Harford (-7, T6) on her 4-under par 68 second round:
“I started off good with putts rolling in, but left a few out there. I don’t think I would change anything [going into tomorrow], I was staying in the present and taking one shot at a time. Out here in the heat, you just have to pay attention to taking care of yourself and your body. Tonight, I think I will tune up a few things but that’s about it, I really think rest is important this week. Additionally, having my mom here feels good, just having someone with me to talk to and keep me calm and taking care of myself. Usually my dad is out here and helps keep me present and calm too, so it’s always really good with them around.”

Casey Danielson (-7, T6) on changing her mindset and playing from behind:
“I made a lot of mistakes today, didn’t play very solid. It’s hard changing your mindset when one day everything is going your way. You can see it and feel it and the next day, you are still hitting great shots, but you have to change your plan and course management. Going into tomorrow, it’s almost easier to not be at the top of the leaderboard, feel like you are coming from behind and have nothing to lose. I like to take that mindset. I don’t mind being a few back because it helps you fire away the next day."

Ana Belac (-6, T10) on learning to enjoy the game as a professional:
“I’m feeling good, I feel like I really got to know the course yesterday. I played my par-5s a lot better today, hitting three out of four in two, and two putted for birdie on all three. It was a big confidence boost securing the birdies where I couldn’t yesterday. I think I am getting more comfortable out here, being my fourth week on the road, after just turning professional a few months ago. I was a bit rusty coming into the season, making the switch from college to pro golf, but I am learning how to have fun and not worry too much about anything because I know my best golf will come when I am relaxed.”