DANIELSON SETS PACE WITH NEWFOUND CONFIDENCE
After adjusting her swing in the offseason and a recent putter change, Casey Danielson (Osceola, WI) found her stride this afternoon at Longbow Golf Club in the first round of the inaugural Founders Tribute. The Stanford University alumna carded eight birdies for the outright lead at 7-under par and a two-stroke advantage going into the weekend.

“My game has changed, I am hitting a lot better than last season which has given me a lot of confidence. I felt really good over the ball today and was swinging really free,” said Danielson, who hit 17 greens in regulation. “Switching my putter grip and putter last week worked out really well today, so I am happy about that change too.”

Other preparations beyond her swing have also been key for Danielson, who matched a career-best score to par on the Epson Tour set in the final round of the 2018 PHC Classic. Finding a good mental approach, bringing a relaxed attitude to her practice round and studying the course were all factors in helping her visualize how she wanted to attack each hole.

“I played pretty smart, had mapped out the golf course pretty well during the practice round so I knew what I was going to do on each hole,” Danielson said. “I wasn’t trying to control too much, I really just wanted to have fun, step up and hit the ball.” 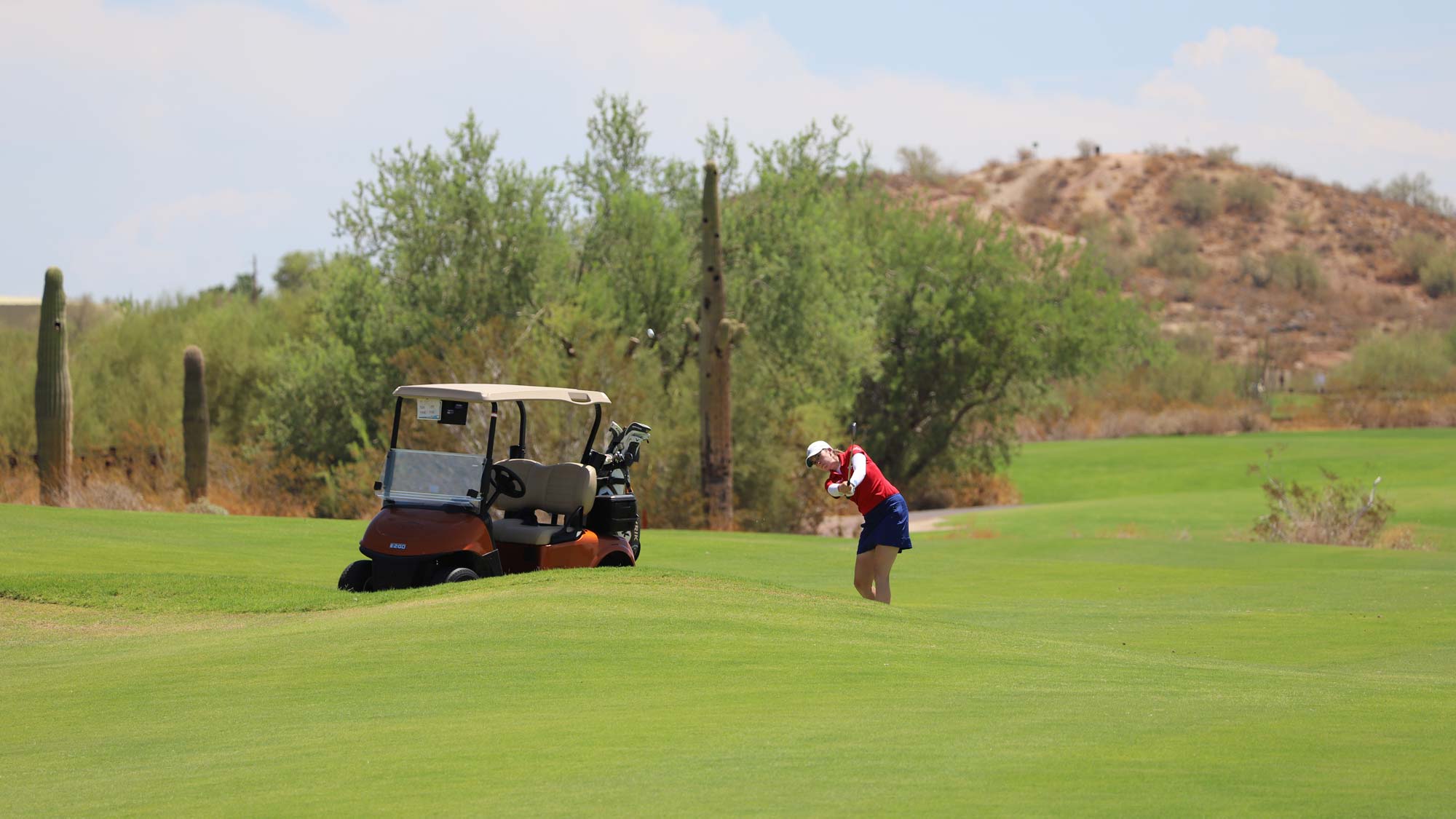 OFFSEASON DEDICATION PAYS OFF FOR KAUFMAN
Following two cuts made the last two weeks on the LPGA Tour and a tied for fourth result at FireKeepers Casino Hotel Championship prior to that, Kim Kaufman (Clark, SD) entered her fourth straight week on the road with the focus of staying hydrated and playing her own game. Kaufman has enjoyed reaping the benefits of her hard work from the offseason, which included a 5-under par 67 on day one in Mesa, Ari.

“Honestly, I worked every day for those five or six months, and I have seen great results,” said Kaufman, who is two shots back of the lead and tied for second with three others. “I have done a lot of work on my putting and I think a lot of people would agree, if you can put well that helps. I need to see my driver turn over a little bit and find a better rhythm with my irons, but overall I am happy with how I look.”

Kaufman found some momentum on the back nine today to take into the second round, stringing three straight birdies together between Nos. 14-16. She hopes to use that as fuel for her afternoon tee time tomorrow.

“Starting today, I wasn’t hitting the ball very well,” Kaufman said. “I made a couple birdies, but it really came down to the last five holes when I started to click. I got there today, but definitely want to get on the range and work on my irons, especially my long irons.” 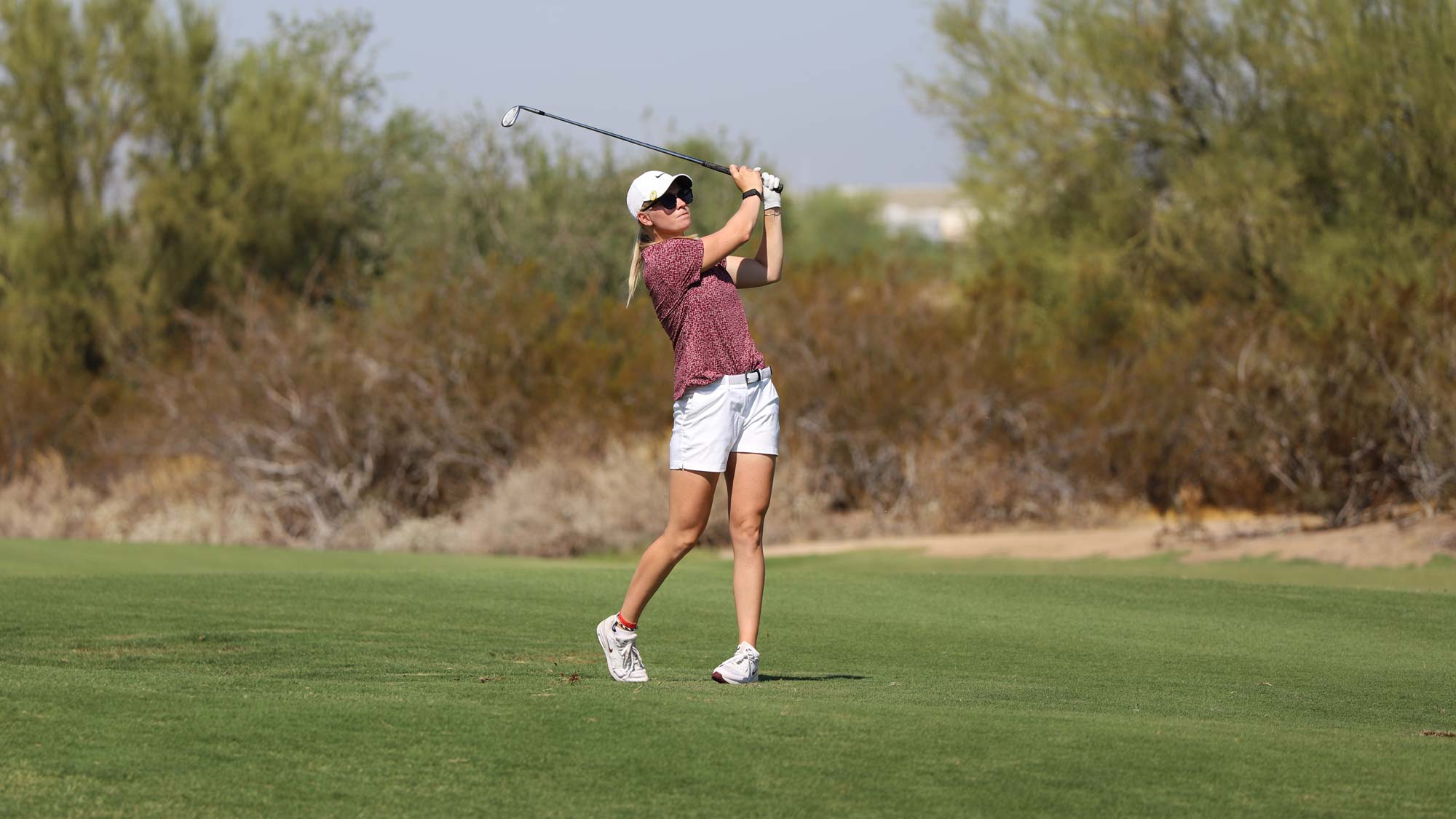 ROOKIE KINHULT MAKES STRONG START IN RETURN
After spending four months with her family in Sweden, Frida Kinhult (Fiskebackskil, Sweden) returned  for her first Epson Tour event since March with a vengeance. The rookie on the “Road to the LPGA” channeled the energy she built up during the hiatus due to the COVID-19 pandemic and fired a 6-under par 30 opening nine.

“I was super excited to finally be out playing again, feel some pressure, read a putt and care about it,” said Kinhult, who finished the day with an opening round 5-under 67. “My focus was better than it has been over the summer, like if I made a bogey it was fine. Today it was real competition, so it was fun.”

This week, Kinhult has her father Mikael on the bag. A golf professional himself, Mikael has also been her coach since she first picked up the game.

“Things happen on [desert] courses like this, but overall I am happy,” Kinhult said. “Like my dad said, I probably wouldtake a 5-under par if someone gave it to me before the round. After being at 7-under par on No. 11, I probably wouldn’t take it [the end result], but it’s a good start and I’m excited to see what happens. He has been teaching me forever so he knows my game well. It’s comfortable having someone that knows your game and is family being around. It is always fun.”

NOTABLE QUOTES
Binny Lee (-5, T2) on course and weather conditions:
“Taking one shot at a time. Focus on my game and hitting one shot at a time tomorrow and staying hydrated. I think that will make a big difference. At the beginning, I was scrambling but I was putting well. The course is in great shape and today the greens were a bit slow and bumpy. If you don’t start it on [your target] line, it’s not going to get there but that is what I was able to do today and execute.”

Sandra Angulo Minarro (-5, T2) on keeping cool in the heat and sticking to her gameplan:
“I was very calm throughout the day and stayed in the moment, never getting ahead of myself. With the heat, I tried to find shade every time I could. Tomorrow, I will stick to my gameplan and focus on course management. Also, I will do my best to stay cool and hydrated with the temperatures showing no sign of letting up. It’s exciting to be in this position after day one, but I want to be even better over the weekend.”

Macy Hubbard (-4, T6) on her second career hole-in-one at No. 16 from 141 yards with a 9-iron:
“It was a day of patience—you wait and you wait, you know there are birdies out there and hole-in-one was awesome. It takes a little bit of luck and skill at the same time, but it gets you going so it was a nice finish on the back nine. It was a little longer than I would hit a 9-iron, but it was down wind and I knew that green hopped forward. Sure enough, it was right at it. We couldn’t see the bottom of the hole, but I thought it was close and had no idea it went in.”