Ana Belac Extends Carolina Golf Classic Lead and More from the Third Round at Pinehurst No. 9

BELAC STRETCHES LEAD TO SIX STROKES AFTER 54 HOLES IN PINEHURST
Ana Belac (Portoroz, Slovenia) extended her lead to six in the third round of the Carolina Golf Classic presented by Blue Cross and Blue Shield of North Carolina with a 2-under par 70 on Pinehurst No. 9 this afternoon. The Duke University alumna is 9-under overall and will look to secure a wire-to-wire victory in the final round tomorrow.

Aross seven starts on the Epson Tour this year, Belac has claimed three top-10 finishes and not missed a cut.

“It’s my first time being in this position. I am surprisingly comfortable because I feel like my game is in the right place,” said Belac, who set a career-best result of tied for fifth at the IOA Golf Classic presented by HomeValue.com. “I am happy and excited to play the final round tomorrow.”

Belac will head off No. 1 tee at 10:09 a.m. ET for the final round in hopes of claiming her first career pro win. Currently ranked No. 18 in the Volvik Race for the Card, the victory and $30,000 winner’s share would move Belac into the top five, as well as give her the inside track to earning a spot in the 2020 U.S. Women’s Open field and LPGA Tour membership for 2021. While navigating her rookie season this year, Belac has welcomed her mother, Erika Belac, on the “Road to the LPGA” as her caddie.

“The first couple of tournaments were a little bit stressful and I was still learning everything, but now I am just having fun during the round and my mom is part of that,” Belac said. “She played a little bit of golf a long time ago, but I think we are a great combo. I am a really independent player and my mom helps to make sure I stay hydrated, eat snacks and don’t forget to breathe.” 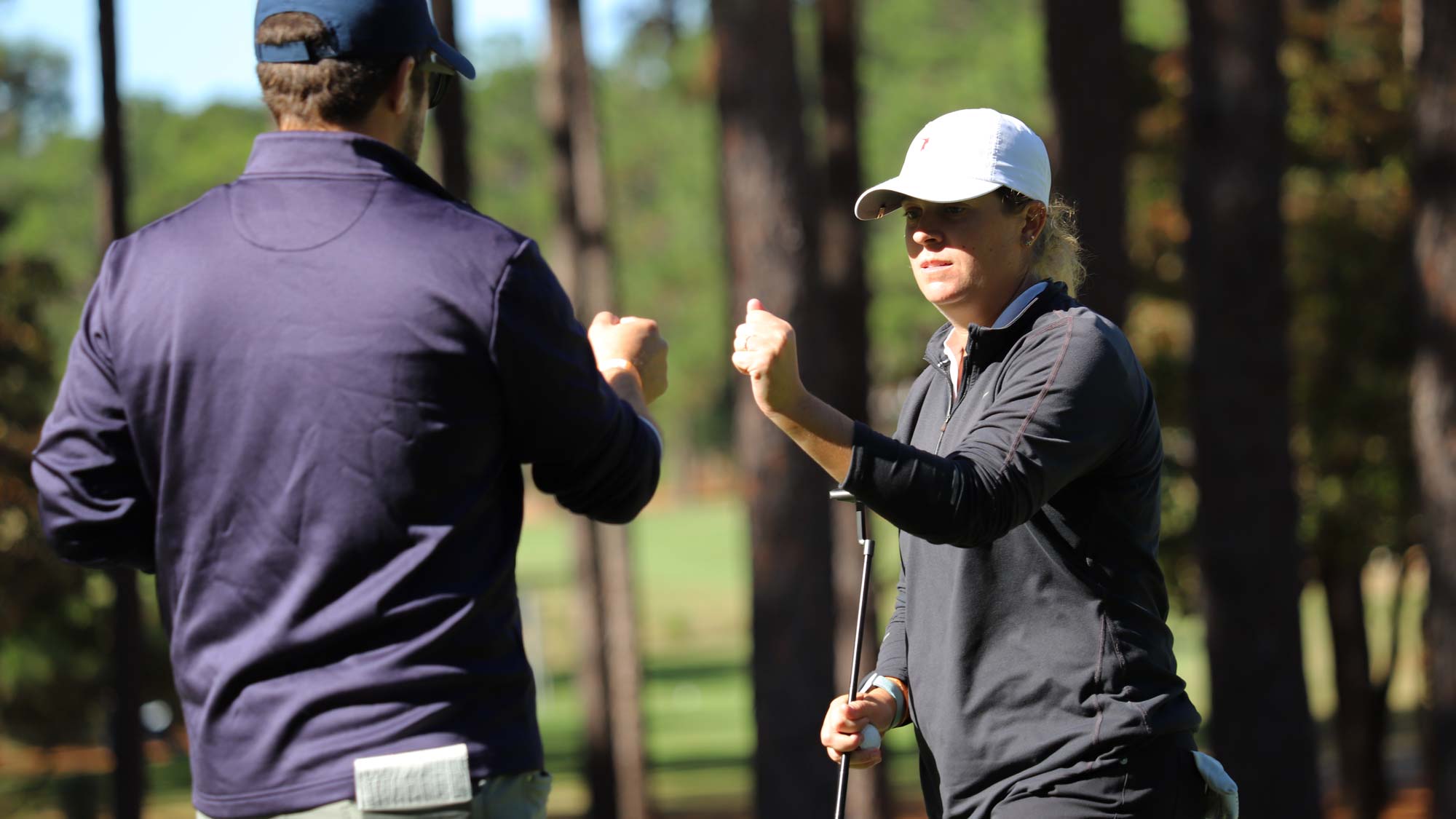 COUGHLIN CLIMBS THE LEADERBOARD ON MOVING DAY
After carding five birdies to close round three at 3-under par overall for the Carolina Golf Classic, Lauren Coughlin (Charlottesville, Virginia) jumped into solo second with 18 holes to play at Pinehurst No. 9. Despite a change in caddie, Coughlin has not missed a beat in hopes of adding a fourth top five finish to her Epson Tour resume this season.

“It has been going well this week,” said Coughlin, who has No Laying Up member DJ Piehowski on the bag. “It has been a lot of fun and he has kept me calm. I definitely miss my caddie John, but DJ has been a good stand in this week for sure.”

Coughlin entered the week coming off a tied for 34th performance at the LPGA Drive On Championship – Reynolds Lake Oconee, a career-best finish on the LPGA Tour. She joins the final grouping tomorrow.

“I’ve been hitting the ball really well the past couple of weeks, even yesterday and the day before I hit it extremely well but just wasn’t really making anything. Today, they started going in,” said Coughlin. “This course can really bite you. I want to stay with what we’ve been doing and hopefully make a few putts.” 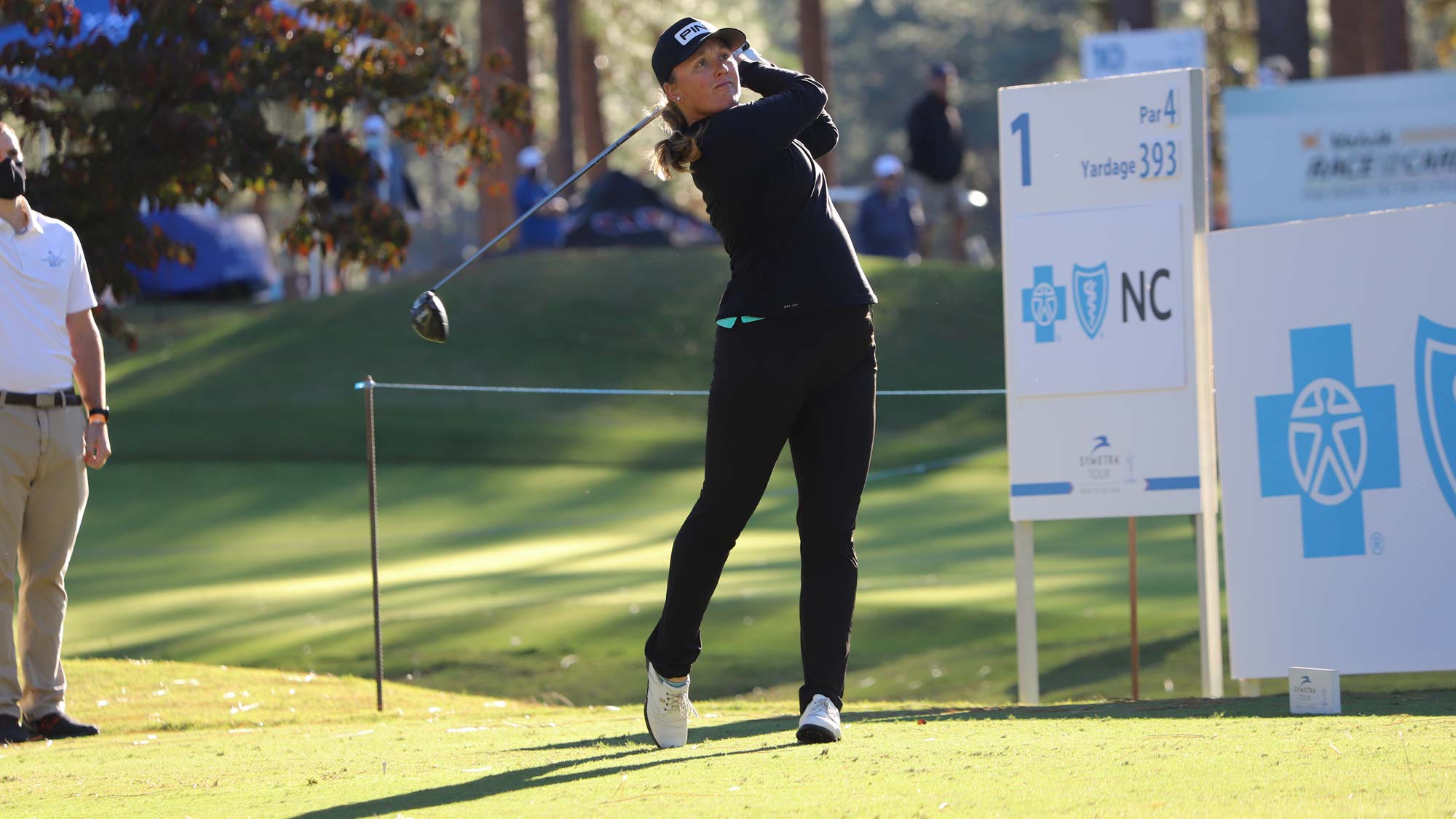 STEEN JOINS THE TOP OF THE LEADERBOARD
Marissa Steen (Westchester, Ohio) is one of three players tied for third at 2-under par overall, joined by Taylor Totland (Tinton Falls, New Jersey) and Karen Chung (Livingston, New Jersey). Steen has improved her score In each round of the Carolina Golf Classic and thinks her game is moving in the right direction.

“I feel like having two bogey-free rounds was good, I haven’t done that in a long time so that was good,” said Steen, who found five birdies today en route to a 3-under 69. “My game is feeling good since the last 27 holes at Mission Inn [Resort and Club Championship presented by IOA]; my first round and a half were rough but made the cut on the number and played a good final round there.”

Looking back to 2019 experiences, Steen mentioned that her top-30 finish in LPGA Q-series presented by Blue Cross NC here in Pinehurst is a reason for her success this week.

“The course is in great shape, the greens are rolling beautifully,” Steen said. “I had some good rounds here at Q-series last fall, so I feel like I already had some good mojo going into this week and some good memories to build from.”

NOTABLE QUOTES
Taylor Totland (-2, T3) on her game coming together:
“Even though my score didn’t necessarily show it yesterday, I felt like I hit the ball well, just couldn’t make a birdie or get inside 20 feet to give myself an opportunity. So today, I just trusted my game and told myself you are playing well, just go out there and have fun today.”

Karen Chung (-2, T3) on her approach to the back nine and her putting this week:
“Every time I hit the back nine, I get into this mentality that I need to save myself and I play a little more aggressive than the front. Today, my putting wasn’t as good as the last two days, but on Nos. 11 and 12, the putts felt really good when they came off the club face.”

Allison Emrey (-1, T6) on her eagle on the par-5 8th:
“It was the perfect number, 77 yards and I hit my 56-degree which goes 75 yards and there was a little down slope there, so it was perfect. It hit a little short and I guess went in.”