WINTER HAVEN, Fla. – A  couple early birdies from Janie Jackson (Huntsville, Alabama)—one at No. 2 to take a four-shot lead and another at No. 4 to claim a five-stroke advantage—was all she needed to separate herself from the pack at the Country Club of Winter Haven and win the 12th annual Florida’s Natural Charity Classic.

“I’m kind of speechless, don’t have many words right now,” said Jackson, who fired a 4-under par 68 this afternoon en route to an eight-shot victory. “That was a really, really tough week. I’m mentally drained, but super happy with my performance. I made some really big swing changes in the offseason, worked hard the last few months and hit is so consistent this week, so it was nice to see all the changes pay off. It feels really good, not sure it feels real yet, but it feels really good.”

The University of Alabama alumna begins her fifth Epson Tour season with her first professional title. With the $18,750 payday, Jackson also surpasses the $100,000 threshold in career earnings ($100,112). This result comes after she ended the 2019 season by setting a career-best result of tied for second at the Epson Tour Championship.

“I texted my caddy [David Kelley] last week and said, ‘How do you feel about going and winning the first event next week,’” Jackson said. “Just felt like my game was in a good place. Conditions were not what I was expecting at all, but I’m super pleased with this.” 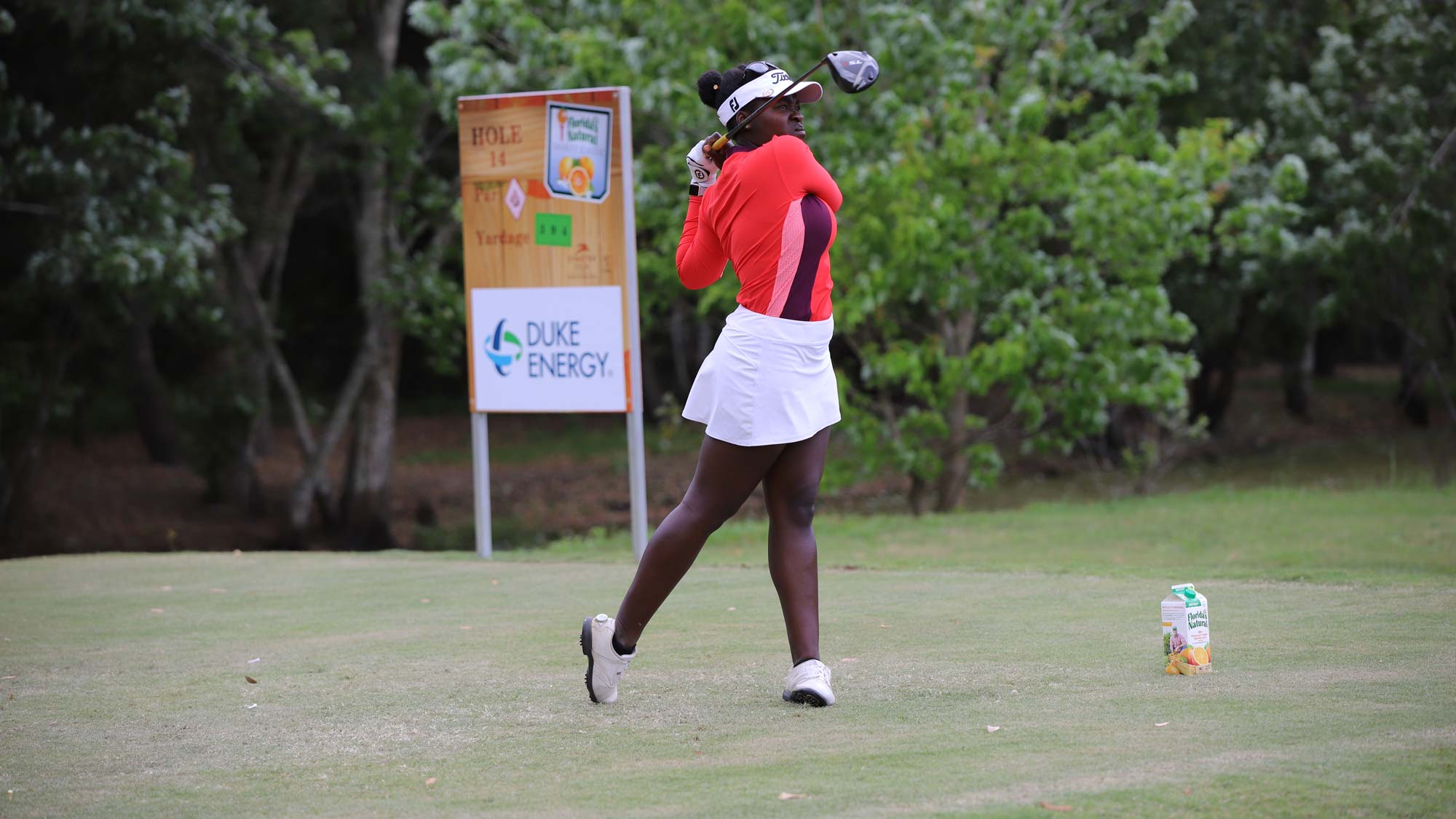 ABE BATTLES TO EPSON TOUR CAREER-BEST RESULT
A strong week from Lakareber Abe (The Woodlands, Texas) was capped by a final round 1-under par 71 and good enough for a career-best finish of tied for third, joining two others at 1-under overall.

Abe recorded four birdies this afternoon and even sat in solo second for a stretch. The performance tops her previous Epson Tour best of tied for 11th at the 2018 Danielle Downey Credit Union Classic.

“It was a good way to start the year,” said Abe, also a University of Alabama alumna. “I worked hard this offseason and nice to see results, but also where I need to get better. I did a lot of short game work, and putting, pitching around the greens which ended up being really helpful this week because it was windy. I got back in the gym a little more than I had in the past and tried to get in good shape. This motivates me to go home and work harder, seeing that I’m closer than I thought I would be at the beginning of the season.”

VOLVIK RACE FOR THE CARD STANDINGS AFTER WEEK ONE
Following the first tournament of the 2020 Epson Tour season, the Volvik Race for the Card welcomes its initial top-10.

The victory and $18,750 winner’s check move Janie Jackson into the No. 1 position, having earned that same amount through one event. Here is a look at the current top-10 heading into the fifth annual IOA Championship presented by Morongo Casino Resort & Spa hosted by the Morongo Golf Club at Tukwet Canyon in Beaumont, Calif. from March 27-29:

NOTABLE QUOTES
Daniela Iacobelli (-2, 2nd) on a runner-up finish:
“Second place is good money, second place in any tournament is not too bad. No complaints, hard to catch the leader and figured get as many pars as I could then try to capitalize when a birdie opportunity comes. It was a tough day, a really tough day out there. I have two months off now because I am not going to the West Coast. This was just really fun to get off the couch.”

Yae Eun Hong (-1, T3) on a top-five result in her Epson Tour debut:
“I practiced with winds during the offseason and was a little more comfortable playing out here. I went to Australia and there was a lot of courses with heavy wind. I also talked with coach about controlling my ball’s trajectory. It was still cold here and many winds, so I tried to keep the ball flight low and stay calm in my mind. I really like this course, it was hard and changed a lot with the winds. The distance was pretty long, and it was good to play here.”

Lauren Coughlin (-1, T3) on shooting 3-under par today and having a good finish to start the season:
“Oh, for sure. It was really, really tough out there. The wind was blowing like crazy. I found a good shot on the range, nice little punch thingy I was hitting and pretty much hit it all day with my irons. I was able to keep it straight and on the green, but if I missed it was able to get up and down. This is probably some of the toughest conditions I’ve ever played. It’s crazy out there. On No. 18 especially, I had 110 yards [to the hole] and hit 9-iron which usually goes about 130, and was like 30 yards short, just barely on green.”