It’s a record-setting week in Opelika, Ala., as the Epson Tour officially welcomes the Zimmer Biomet Championship hosted by Nancy Lopez and its $300,000 purse to the family. The total prize money is the largest in history on the ‘Road to the LPGA.’

Before this inaugural event, the 2016 Self Regional Healthcare Foundation Women’s Health Classic in Greenwood, S.C. held the distinction of richest purse at $250,000. That was matched earlier this season by the SKYiGOLF Championship. However, there is a new precedent setting the tone for the future and what ‘Drive On’ means to the Epson Tour.

“Zimmer Biomet is stepping up and giving these players an opportunity to play for some real money, I would call it,” said LPGA Tour and World Golf Hall of Fame member Nancy Lopez. “I thank them for doing that, first of all. These players come out here with their heart and soul, a desire to make it on the LPGA Tour. An event like this definitely opens the door for them, giving the opportunity to play a great golf course and have great competition. The purse is definitely a plus to carry them to the next event and maybe one day getting on the LPGA Tour.”

From 2015-2017, the Lake Course at Grand National on the Robert Trent Jones Golf Trail hosted the PGA TOUR’s Barbasol Championship. Now the venue prepares for its first women’s professional event and a 144-player field featuring the next wave of LPGA Tour talent. Better courses are just one component of the ‘Drive On’ spirit used to reach new heights.

In entirety, the growth of the Epson Tour cannot be understated. Since 2013, the official qualifying tour of the LPGA has gone from total season purses of $1.62 million to surpassing the $4 million threshold for the first time ever this year. The number of events has also increased from 15 to 24.

“The strength of the Tour has produced an even better product on the golf course,” said Mike Nichols, the Chief Business Officer of the Epson Tour.  “We are now attracting players from more than 40 countries and have over 30 countries represented in the field each week. As a whole, the Tour has really gone from needing a little bit of life support to truly featuring the best players from around the world that want to reach the LPGA Tour.”

Moving forward, the boundaries are limitless. The train has left the station and it’s only a matter of who wants to hop on and grow the women’s game.

“It definitely exemplifies that kind of spirit to ‘Drive On,’ we’re going forward and stepping forward to give these girls the opportunity to play on the LPGA Tour,” Lopez added. “When I played on the LPGA Tour the purses were small, but they grew. These players playing great golf helps that because the sponsors want to be a part of that. They want to be part of the LPGA and all these great stars that play this great game, give them more opportunity. It’s a great place for anyone to showcase what their company is all about, by being a sponsor to the Epson Tour and helping these girls ‘Drive On.’” 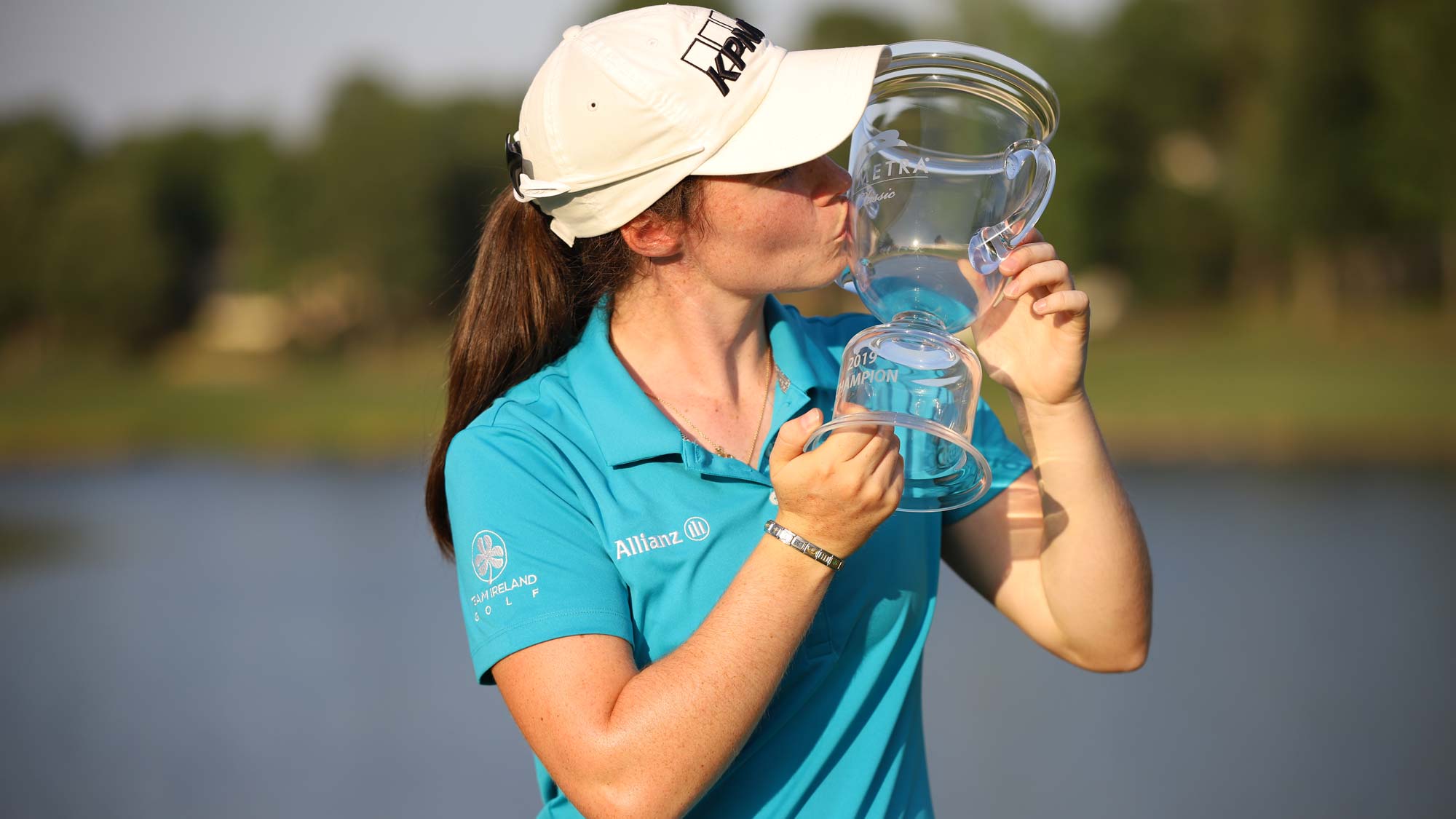 While it is unclear exactly how much money it will take to secure a spot in the Volvik Race for the Card top-10 this season with total purses at a record high, Leona Maguire (County Cavan, Ireland) is well on her way to playing on the LPGA Tour in 2020.

The four-time Women’s Golf Coaches Association (WGCA) First Team All-American and three-time ACC Player of the Year for Duke University sets the standard on the season money list with $73,790 earned across six starts. That amount would place her at No. 5 in the final 2018 standings, when total purses were only $3.15 million. With 17 events remaining on the 2019 Epson Tour calendar, Maguire is on pace to eclipse the all-time single-season earnings mark set in 2016 by Madelene Sagstrom (Enkoping, Sweden) of $167,064.

“I suppose this time last year I hadn’t even played an event,” said Maguire, who has five straight top-five finishes including two wins. “I’ve basically done this year what I tried to do last year, get off to a really quick start. I definitely think going back to play in Australia at the start of the year really helped because I felt like I wasn’t quite starting the Epson Tour season at zero. I wouldn’t have expected to win two events already, but it takes a lot of pressure off the rest of the season in terms of how I need to play and scheduling as well.”

In the past, individuals who recorded three victories at any point during the Epson Tour season were granted a battlefield promotion. It placed the respective player in Category 13 on the LPGA Tour Priority List. On the brink of a third title after stepping into the winner’s circle at the Windsor Golf Classic and Epson Classic, Maguire will not have that chance as the article was removed from regulations during the offseason.

Nonetheless, she still qualified for the U.S. Women’s Open conducted by the USGA from May 30-June 2 and also accepted a sponsor exemption into the KPMG Women’s PGA Championship contested June 20-23 at Hazeltine National Golf Club. Through her Ladies European Tour status, Maguire will compete in the Aberdeen Standard Investments Ladies Scottish Open from August 8-11 as well.

“That was like a bonus thing and would’ve been nice if it was still intact, but at the same time I’ll still get to play in a lot of big events,” Maguire said. “Either way, my schedule may change a little bit from what it was at the start of the year, maybe get a few LPGA invites which are basically the same as battlefield status anyway. I’m pretty happy with where I’m at right now.”

The inaugural Zimmer Biomet Championship hosted by Nancy Lopez has been designated as the ‘flagship’ event for the 2019 Epson Tour season, meaning it will receive the same minimum strength of field as the major tours represented in the Rolex Women’s World Golf Rankings.

“I think it’s fantastic and the bigger events get, the better players the Tour attracts as well,” said Maguire. “You’ll see a lot more international players coming. Even from last year, I think all the purses are nearly up from last year. Talking to the girls on the LET, they are quite surprised how good the Epson Tour is and how many events we have, how good the purses are. It’s great to see sponsors supporting the women’s game. [These sponsors] have a lot of options what to do with their money and we’re pretty fortunate that they choose us.”

This tournament joins the 2018 Donald Ross Classic in featuring the highest strength of field for a Epson Tour event since it started being included in the rankings. The winner will receive six points and the top-41 finishers are eligible for points. Combined with a record purse of $300,000 this week and the “Road to the LPGA” continues to serve its purpose while supporting players monetarily to a greater degree.

“I’m not sure the Epson Tour will soon become a place where all players can earn a living, but I’d like it to get to the point where the top players don’t have to stop competing due to their financial situation,” Nichols said. “We often look back to Mo Martin and how it took her six years to graduate from this Tour. She always talked about having just enough money to keep the dream alive. I think about what would have happened if Mo ran out of funds before reaching the LPGA—she never would have become AIG Women’s British Open champion. Or the story of Madelene Sagstrom who started her Player of the Year campaign with, I believe a $5,000 loan from a relative and was going to play until that ran out. Fortunately, she started well and put enough in the bank to fund her season and eventually become the all-time money winner for a single year. Perhaps if she had started with five missed cuts and run out of money, there would have been no Solheim Cup team for her the following season. Hopefully we can continue to grow purses each year as we have and improve the financial outlook for our players.”
Comments
Tournaments
Florida's Natural Charity Classic Winter Haven, Florida
Carlisle Arizona Women's Golf Classic Mesa, AZ
IOA Championship Presented by Morongo Casino Resort & Spa Beaumont, California
Casino Del Sol Golf Classic Tucson, AZ
Copper Rock Championship Hurricane, UT
Top Stories