CLANTON IN COMMAND THROUGH 36
Playing in her first competitive tournament of the year, Cydney Clanton (Concord, North Carolina) is the 36-hole leader at the fifth annual Murphy USA El Dorado Shootout and with a score of 2-under par overall, the only individual in the field even or under par after two rounds.

Starting on No. 10 this afternoon, the Auburn University graduate battled to a 2-over par 38 going out with two bogeys, two birdies and a double bogey. She eventually turned things around on the front and went even par to take a three-stroke advantage into the final round tomorrow.

“I didn’t feel comfortable over the putter the first couple holes, so I made a couple silly mistakes there,” said Clanton. “Then I hit not a terrible tee ball, but enough to get me in trouble on No. 15 and it just was unfortunate, lost ball. Really hit the ball overall on the back just as good as I did on the front side.”

Clanton will head off No. 1 tee at 9:24 a.m. CT in the morning searching for her second career win.

“Being here is great and being competitive is great,” said Clanton, who won the 2013 Four Winds Invitational. “I’ve been dying at home, ready to compete. It’s nice to come out, hit the ball and look up to see that it’s going where I want it to go. The wind was definitely a factor today and if it comes up tomorrow like it did today, it will definitely be a factor again.” 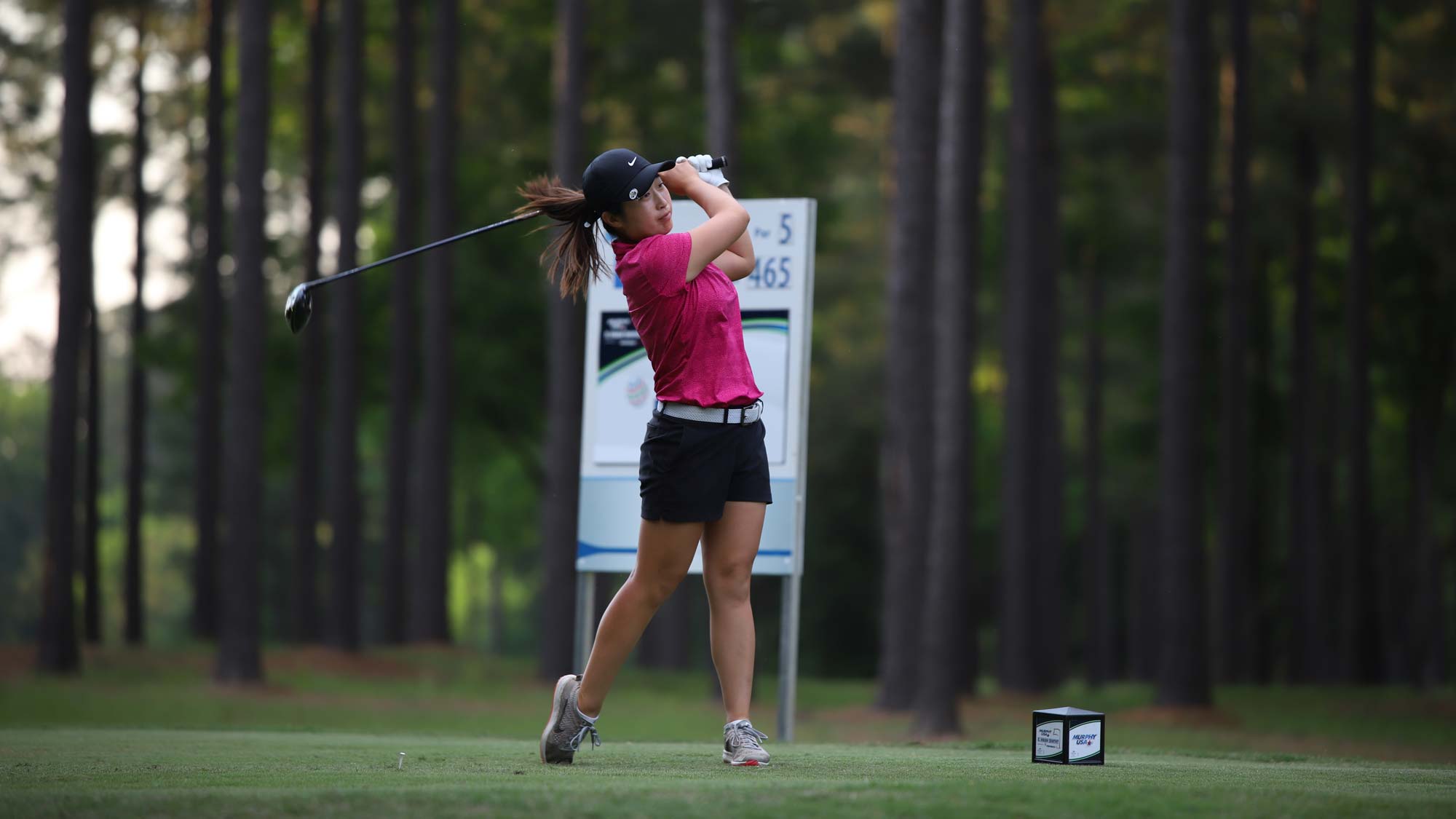 KIM EAGER FOR FIRST FINAL PAIRING OF CAREER
Mystic Creek Golf Club and El Dorado, Ark. as a whole has not been all too kind for Kyung Kim (Chandler, Arizona) over the years, but so far the University of Southern California alumna has far exceeded her own expectations.

A car accident in 2017 forced her to withdraw from the event and last year she missed the cut. However, this time around is a different story. Currently at No. 7 in the Volvik Race for the Card, Kim used a second round 1-under par 71 to sneak into a tie for second position with 18 holes to play.

“This golf course is pretty hard, and it was pretty windy in the beginning today,” said Kim, who has four top-25 finishes this year in four starts with a season-best solo third at Florida’s Natural Charity Classic. “I just wanted to hit fairways and greens, made some good par saves. I never really played well here, so my goal was to at least finish and make the cut, just be there on Sunday.” 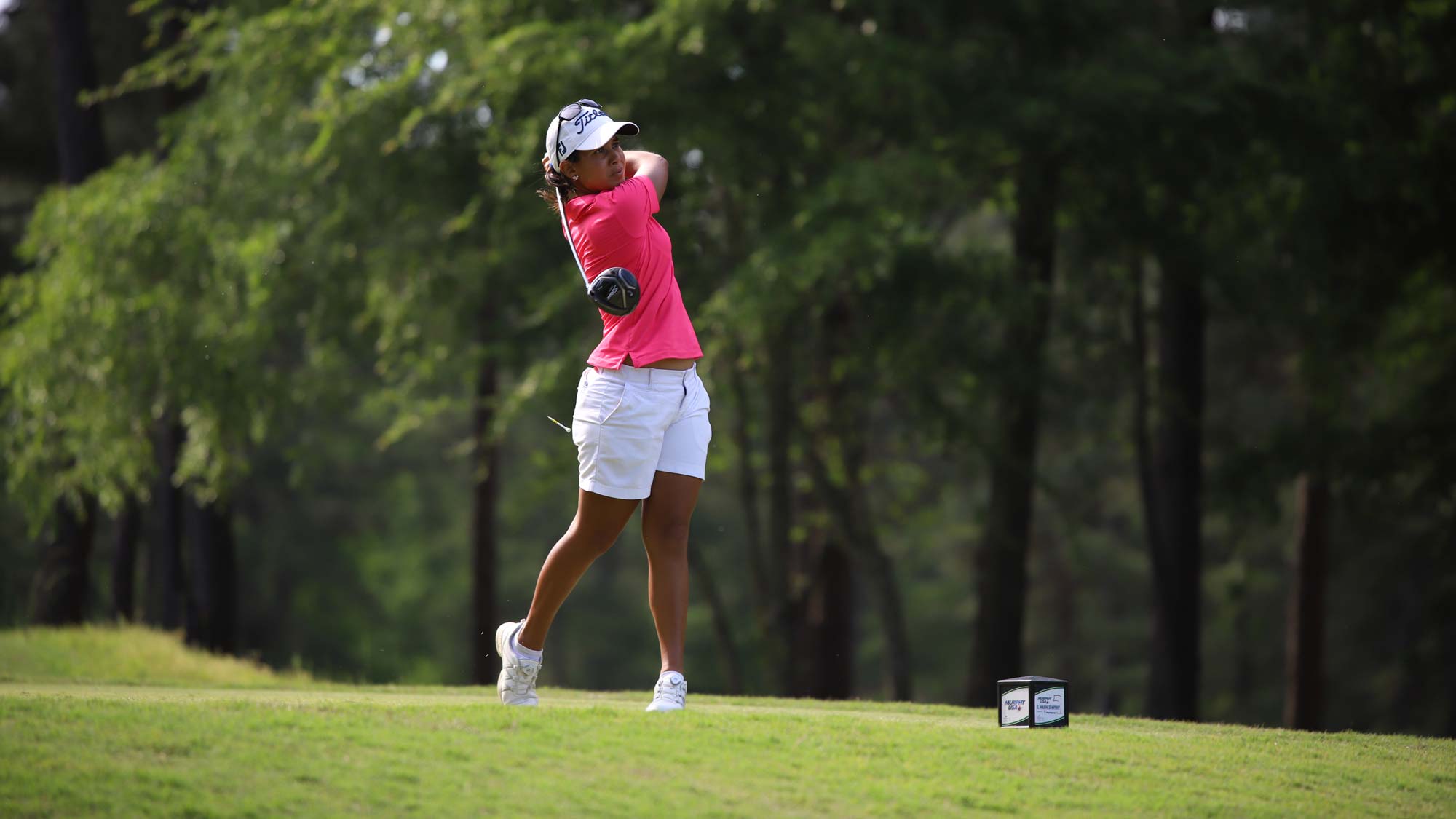 GRANADA HOPING EL DORADO PROVIDES ELUSIVE WIN
Like Clanton, another veteran to both the LGPA Tour and Epson Tour ready to make a splash in the final round is Julieta Granada (Asuncion, Paraguay). She won the 2005 YWCA Futures Classic and became a Rolex First-Time Winner on the LPGA at the 2006 ADT Championship, but has yet to step into the winner’s circle since.

Granada has been in the hunt at each of her previous three starts on the Epson Tour this year. That includes two tied for second finishes. Tomorrow, she’ll hope El Dorado provides some spark for her to taste victory once again.

“I just have to keep hitting the way I am hitting,” said Granada, who shot 2-over par today and joins Kim at 1-over par overall. “I had so many chances out there and it seems like it’s just on the edge one way or the other, a little too hard or a little too soft. I have to work on my speed for tomorrow and if I keep having those chances, hopefully tomorrow they’ll go in.”

NOTABLE QUOTES
Brenda Gonzalez (+5, T13) on making her first Epson Tour cut in the state she attended college:
"It feels really good and more because I think I’m going to be in a pretty good position. It also feels very special to be around people like my coach who came to watch, and some friends are here. This course is also my favorite and it feels even better since last year I didn’t do well in this tournament. I was an invite and didn’t do well, but prepared really good for this one.”

Fernanda Lira (+11, T50) on recording her first hole-in-one in competition on the par-3 4th from 152 yards with a 6-iron:
“It was pretty amazing. I was actually a little worried about that hole because it was in a tough pin position, so I was thinking if I could just flight it down and eliminate the wind, get it somewhere on the tier then it would be awesome. As soon as it bounced I thought it was a great shot, and it bounced again and disappeared. I was like, ‘Oh my gosh, it went in.’ It was really emotional after.”

Alexis Belton (+19, MC) on playing in the Murphy USA El Dorado Shootout after several storms ripped through her hometown of Ruston, La. earlier this week:
"The tornado came and was unexpected, so people weren’t able to prepare for it. A couple family businesses got destroyed, but it was quick cleanup. My parent’s Wingstop franchise in the Ruston location was totaled and then Roly Poly was totaled, which is a sandwich shop. My brother goes to Louisiana Tech. A lot of the football field and their area had a lot of damage as well. [On the course] I hit it really well today, just had a lot of bad breaks that resulted in big numbers. I feel like it was a huge step forward and looking forward to playing whatever event next, making the cut and winning some money.”