GUTIERREZ NUNEZ FINDS CONFIDENCE, SURGES INTO LEAD
Epson Tour rookie Ingrid Gutierrez Nunez (Cuautla, Mexico) buried a short eagle putt on No. 9 this afternoon to cap a 6-under par 66 in the second round of the IOA Invitational and set the 36-hole tournament scoring record at 8-under par overall.

“It’s really nice to start going uphill because at the beginning of the season I started to get a little frustrated by not making cuts,” said Gutierrez Nunez, who missed the cut by one stroke in each of her first three starts this year. “I stayed patient and focused on my course management since that’s one big thing you need to change from college to pro.”

Earlier in the week, Gutierrez Nunez earned a spot in the field for the 74th U.S. Women’s Open by finishing second at the sectional qualifier hosted by Bradenton Country Club in Bradenton, Fla. with a 36-hole score of 3-under par. The University of New Mexico alumna is now in this spot at Atlanta National Golf Club because of the advice she received from one individual.

“In the qualifier, Benito Olguin was my caddy and he actually gave me the confidence to start believing in myself,” Gutierrez Nunez said. “I did adjust some things in my swing, but golf didn’t change from one week to the next. Now my psychologist is here and has helped provide even more confidence in what I need to do with the shots that I know how to do. He’s making golf more simple than I was doing it.”

SANZ BARRIO PLANNING TO USE EXPERIENCE TO ADVANTAGE
Currently at No. 20 in the Volvik Race for the Card, Marta Sanz Barrio (Madrid, Spain) played her 15th round of the year on the Epson Tour today and carded a score under par for the 10th time by shooting 5-under par 67 to claim solo second with 18 holes remaining.

“It’s really hard to put yourself in this position and doing so means I’m playing really good golf,” said Sanz Barrio, who is 6-under par overall. “I just have to keep trusting myself and hopefully the win will come soon enough. You have to keep grinding out there and that characterizes me.”

A past champion on the “Road to the LPGA” at the 2018 FireKeepers Casino Hotel Championship, Sanz Barrio has a plethora of experience to fall back on. Beyond the victory, she was part of the final grouping in her last start at the Windsor Golf Classic.

“I think I’ve learned a lot the past times from playing in the last group, like I did in Windsor a few weeks ago,” Sanz Barrio said. “I got great conclusions after playing there and can use that to my advantage. Stay calm tomorrow, keep playing my game, follow my strategy and try to post a good number.” 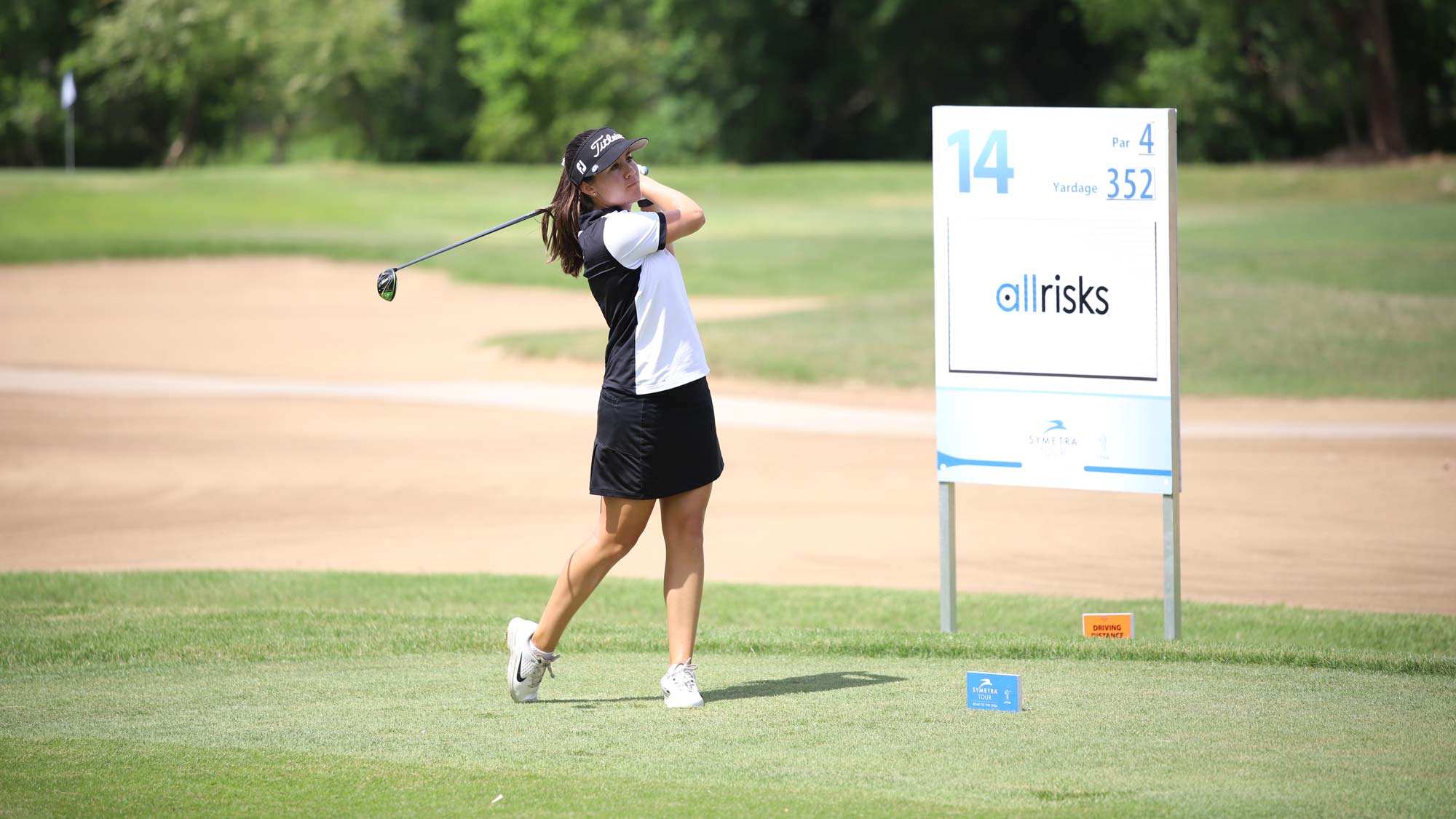 MCCURDY READY FOR SPOTLIGHT, POSSIBLE CHAMPIONSHIP RUN
The steady, consistent play demonstrated by Lindsey McCurdy (Liberty Hill, Texas) so far this season has culminated in the first final grouping for the second-year pro. She heads into the final round three shots back of the lead at 5-under par overall.

“It was a really solid day,” said McCurdy, who concluded a 2-under par performance today with a three-putt par on the par-5 18th. “Toward the end I missed a couple putts I wish I had back, but that’s going to happen in golf. Feels good to be able to trust my game, knowing I can hit whatever shot I’m looking at.”

Coming off a season-best result of tied for ninth at the Murphy USA El Dorado Shootout, McCurdy has played the weekend in all six events. The alumna of Southern Methodist University (SMU) is right on her way to a fourth top-20 finish with another solid effort tomorrow.

“I feel like I’ve just been playing good golf,” McCurdy said. “I knew that if I kept doing that and trusting my game, I would be in this position. I feel ready and like I’m supposed to be here.”

NOTABLE QUOTES
Madison Pressel (-4, T4) on her preparation for the IOA Invitational with Chuck Cook:
“I’ve worked really hard with my [swing] coach and we feel really good with where my swing is. Mentally how I’m playing, I think that’s the biggest thing with feeling confident and not being scared of a result. Just going out trusting everything I did in the offseason and stay patient.”

Julieta Granada (-4, T4) on being in the hunt again after three runner-up finishes this year:
"I don’t know, just keep knocking on the door and maybe it’ll open sometime. I’ve been hitting it really well, haven’t been making a ton of putts. Most of the birdies I had were tap-ins, so I definitely have to spend some time on the green getting my speed and lines so I can make a few more tomorrow.”

Demi Runas (+3, MC) on recording a hole-in-one at the par-3 3rd with a 5-iron from 173 yards:
"I would think a pretty tough par-3, all over water basically all carry and the greens are a little bit firm this week. Just tried my best to pick the right number and calculate the release. It looked pretty good the whole way and I was honestly just excited it was on the line, lucky enough for it to go in. My second in competition and fourth total."