CHENG TAKES HOME TITLE IN BATTLE CREEK
A final round 4-under par 68 performance proved to be the winning formula for Ssu-Chia Cheng (Taipei, Chinese Taipei) as she secured her first professional victory this afternoon at Battle Creek Country Club by finishing 13-under par overall in the FireKeepers Casino Hotel Championship.

“It means a lot to me and I’ve been waiting for this going on five years now,” said Cheng, who began her pro career on the Ladies European Tour in 2015. “I’m really happy to win the title and it helps with my Volvik Race for the Card ranking quite a bit. Paula [Reto] played good and I made a few birdies on front nine. Then after my birdie on No. 9 we were tied at 12-under and that was the big one for me.”

As Cheng described, when the final pairing made the turn it was her and Paula Reto(Bloemfontein, South Africa) atop the leaderboard. A bogey on No. 12 by Cheng gave Reto a one-shot advantage, but Cheng was clutch down the stretch with birdie at both Nos. 17 and 18. Her 18-foot putt on the last hole rattled to the bottom of the cup to clinch a two-stroke win, as Reto recorded bogey.

“I just told myself that you never know what will happen,” Cheng said. “Standing on No. 17 tee, I never thought I would make birdie and on No. 18 as well because it is such a tough hole. I was really focused on the long putt and simply tried to make a good stroke, not thinking about winning or the scores. I had a couple more opportunities on the back, but my putting and tempo wasn’t that smooth.” 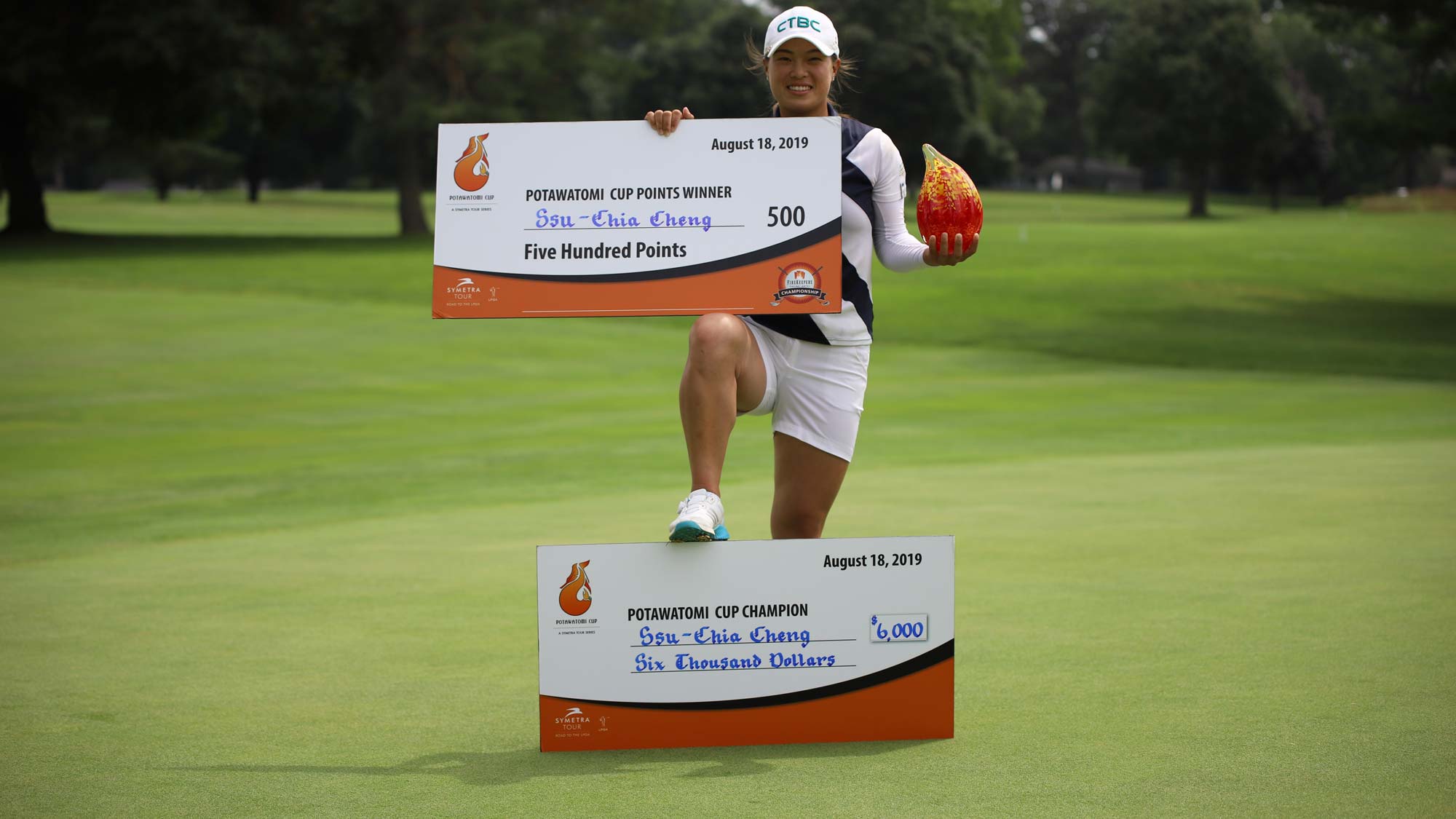 The FireKeepers Casino Hotel Championship served as the fourth and final event of the series sponsored by Potawatomi nation tribes for a sixth consecutive year. Before raising some hardware in Battle Creek, Mich., Cheng finished tied for 14th at the Four Winds Invitational, tied for 24th in the Upper Peninsula at the Island Resort Championship and tied for fifth at the PHC Classic to accumulate 706 total points and edge out Daniela Iacobelli (Melbourne, Florida) with 668.70 points.

“It’s just an awesome week for me,” said Cheng. “My wrist actually didn’t feel that good earlier in the week and so I wasn’t thinking about the possibilities. I just wanted to go out there and play my best, have fun. It means a lot to me and I’m happy to win the title. On behalf of all the players, thank you to the Potawatomi nation tribes for their continued support of women’s professional golf.”

VOLVIK RACE FOR THE CARD STANDINGS AFTER WEEK EIGHTEEN
Following the 18th tournament of the 2019 Epson Tour season, the Volvik Race for the Card welcomes a fresh top-10.

The victory and $18,750 winner’s check move Cheng up four spots to No. 7 with $86,218 earned through 17 total starts this season. Here is a look at the current top-10 heading into the fifth annual Sioux Falls GreatLIFE Challenge at Willow Run Golf Course in Sioux Falls, S.D. from August 29-September 1:

NOTABLE QUOTES
Paula Reto (-11, T2) on what she takes away from her performance:
“I’m happy about my week, just too bad about the last hole. Will take some good positives from this into two weeks from now in South Dakota. I can build from here and know there’s a few things I worked on prior to the event that helped me a lot. It’s nice to have three rounds under par, which I haven’t done in a while. Plenty of positives and congratulations to the winner.”

Milagros Chaves (-11, T2) on her finish and overcoming a rough start:
“I had a rocky, or would say rookie start, but I got my game back together at the end of the front nine and found some birdies. Tried to keep that momentum going and got another three birdies on the back to put me in a great position on the leaderboard. Definitely a lot of nerves on the front and then I got used to it. Thankfully I had a good friend [Georgia Lacey] on the bag. It feels great.”

Vicky Hurst (-9, T5) on capturing back-to-back top-five Epson Tour finishes:
“It feels good, my game is right where I want it. My putting has been a lot better over the last month or so, and I’m hitting it well. I’m really confident going into the last five events, but we’ll just see how it all goes.”